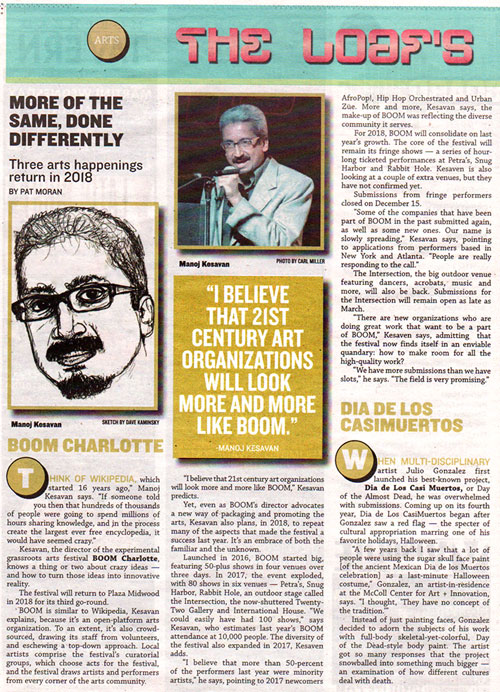 BOOM’s Executive Director, Manoj Kesavan, is profiled in Creative Loafing’s “Arts to Watch 2018” edition, on stands the last week in 2017. Excerpt below:

“Think of Wikipedia, which started 16 years ago,” Manoj Kesavan says. “If someone told you then that hundreds of thousands of people were going to spend millions of hours sharing knowledge, and in the process create the largest ever free encyclopedia, it would have seemed crazy.”

Kesavan, the director of the experimental grassroots arts festival BOOM Charlotte, knows a thing or two about crazy ideas — and how to turn those ideas into innovative reality.

The festival will return to Plaza Midwood in 2018 for its third go-round.

BOOM is similar to Wikipedia, Kesavan explains, because it’s an open-platform arts organization. To an extent, it’s also crowd-sourced, drawing its staff from volunteers, and eschewing a top-down approach. Local artists comprise the festival’s curatorial groups, which choose acts for the festival, and the festival draws artists and performers from every corner of the arts community.

“I believe that 21st century art organizations will look more and more like BOOM,” Kesavan predicts.